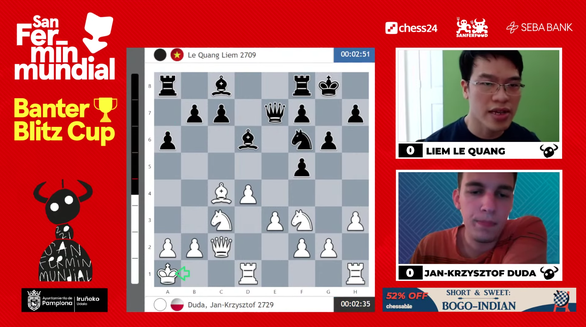 A screenshot of the Banter Blitz Cup final between Le Quang Liem and Jan-Krysztof Duda on June 9, 2021.

Le Quang Liem finished second in the Banter Blitz Cup on Friday to secure entry to the San Fermin Mundial tournament in Spain.

After beating Ukrainian player Kirill Shevchenko 4.5-2.5 in the semifinals on Thursday, he faced the tournament top seed, Poland’s Jan-Krysztof Duda, in the final and lost 1-5.

The winner can choose to play in either the Champion Chess Tour or San Fermin Mundial (SFM), and Duda choose the former, meaning Liem will play in SFM.

SFM is a knockout rapid chess tournament to be played in Pamplona on July 10-11 with prize money of $60,000. Its eight-man field will have four players from the world’s top 10.

Due to the Covid-19 pandemic, players have the option of playing online.

Each tie will consist of eight matches of rapid chess. In case of a 4-4 score, two matches of blitz chess will act as a tie-breaker and then an Armageddon match if still tied. The player with white pieces will get five minutes while the other will get four. Black will advance if the score is tied.

Liem’s first opponent in a match on Sunday will be American Grandmaster Wesley So.